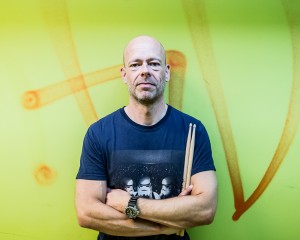 Grew up in the Danish town of Viborg. At the age of 10 I started playing the clarinet and saxophone in a local woodwind orchestra. I learned a lot about basic music theory, sight reading and playing with other musicians. However, I soon realized that I was much more interested in what took place at the back of the orchestra – where the drummers and percussionists roamed – and after a period of hitting and drumming on everything I could get my hands on at home I bought my first drum kit at the age of 14.

I was into drumming right away. I received lessons at the local music school and was always playing or practicing – often to music playing on the radio. Soon I started to discover drummers such as Phil Collins, John Bonham and Stewart Copeland whom I would study and emulate to the best of my ability.

I started playing in various local bands – among others Danish entertainer Søren Sigurd Barrett who I met in high school. We played a ton of duo gigs to earn money during the high school years – as well as doing various other common projects during those years.

At that time I was also playing in a local band by the name of Farandola with vocalist Dicte Westergaard. Dice and I planned to form a band sometime in the future.

We would do this in 1989 when both of us had made the move to the Danish city of Aarhus – a larger city with a bigger and more lively music scene. The band got the name Her Personal Pain and would quickly become very succesful in Denmark. By the end of the eighties and beginning of the nineties we focused on this band and recorded the debut album Songs From Cinema Café which was released in February of 1992. This was followed by a dense touring schedule and in 1993 we won a music award for Best Upcoming Band. Unfortunately, due to a very bad and unhealthy working climate – combined with very differing opinions as to the stylish direction we wanted to go – we decided to disband.

After this I played in various situations with various people, but in the aftermath of all the frustrations I had experienced in Her Personal Pain I focused much more on giving lessons – as I had done a lot earlier.

In 1996 I played on Dicte’s solo album Voodoo Vibe and this would be my last real musical effort for many years.

In June 2015 I won Thomas Lang’s big international drumming contest The Big Drum Bonanza Playalong Contest ahead of around 400 drummers from 33 countries and this has brought back my desire to play drums and work as a musician.

Recently a lot of other names have been added to the list – Thomas Lang, Gergo Borlai, Matt Garstka and Chris Coleman to name a few.

I was doing quite a bit of teaching already during the high school years and this would continue during the years with Her Personal Pain. When HPP had become popular I also began doing clinics and workshops. When I quit performing around 1996 I continued for a couple of years doing lessons at various music schools as well as conservatories.

Now that I have taken up playing again I am also beginning giving lessons.